HAPPY NEW YEAR to all! And to all a good night.

I came to NEW YORK CITY for the very first time on NEW YEARS EVE, 1985 going into 1986.  I went to the Blue Note with Benny Green as he was playing with Betty Carer at the time. I hung out so much that 10 days I don't think I saw the light of day as I was going to bed "in the wee small hours of the morning" every single night. During that first 10 days of the new year, I sat in at a club called Pats in Chelsea. The owner immediately offered me a regular weekly gig on Monday nights. I explained to him that I didn't even live in New York but was just here checking out the scene from Dallas, TX. He replied, "well, when you move here, and I know you will, the gig is yours".  At the time, I only had one gig, one night a week in Dallas. Jazz was not in fashion in Dallas that year. It was always up and down.  So...Giving it some serious thought I went back home to Dallas, had a garage sale, paid off my car, tied up some loose ends, packed my bags, and moved to NY by February 1986. (before I could change my mind or talk myself out of it.). I got off the buss at Penn Station with 2 foot lockers and a stuffed Koala Bear that Peter Dowdall brought me from Australia. I did that gig at Pats in Chelsea and learned that it was only $40 a night. Benny had given me his $40 making it $80 but I only learned that later. He thought it would help convince me to come I guess. Anyway,   I got press from my one night a week gig at Pats in Chelsea within my 1st month here.  I've been here ever since. It's hard to believe it was that long ago.

Wishing you all joyous memories for your New Year!

May you all grow in positive ways in the coming year. 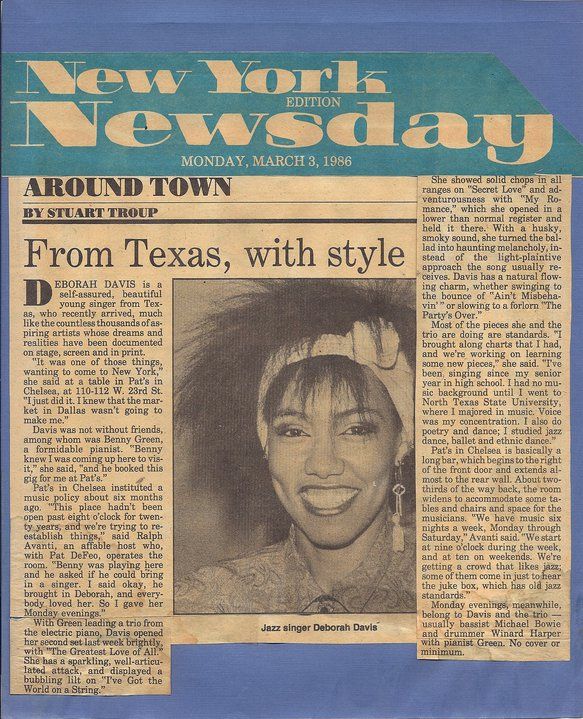